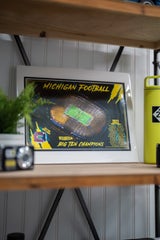 Michigan is Back 2 Back Big Ten Champions! Celebrate this 13-1 season with this commemorative poster! It is printed on Fuji Pearl paper with a double matting. The outside mat is white with an inside black matting.

This rival game shot of MSU vs. U of M has been on my bucket list for quite some time. This is the 2nd night game in 114 years between these two teams.

You have no idea how hard this shot was to align. If you look closely at centerfield, is the Coast Guard's H-65 helicopter directly inside the block M! I have dreamed of getting this shot, and seconds before I did, I thought I blew the opportunity. The wind shifted and pushed the helicopter so the landing skids covered up the middle of the field. At that moment, I made a quick decision to move my camera angle between the helicopter and the skids. I held the shutter down and prayed. Huge props to @myflighttours and Kory!!